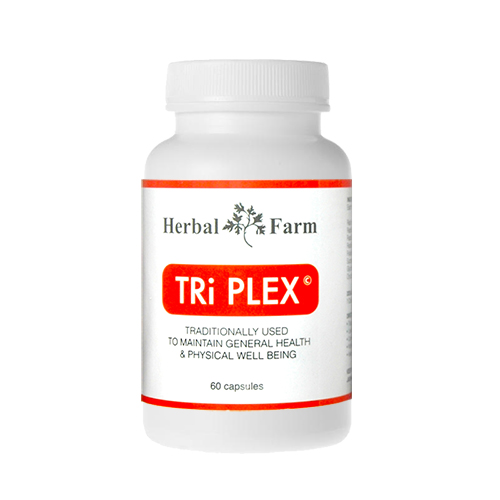 Triplex is a unique triple action formula with five supertonic herbs chosen for their ability to nourish, strengthen and heal all the five main internal organs – kidneys, liver, heart (including pericardium), lungs and spleen.
Other organs – stomach, gall bladder, urinary bladder, colon, small intestine, and ‘triple warmer’ (a conceptual organ) – also benefit from Triplex.
These organs correspond to the ‘wu zang liu fu’ – five zang and six fu – organs of traditional Chinese medicine (TCM). The zang organs govern and regulate; fu organs transform and transport substances.
They work in sync and when in harmony, the Yin and Yang is balanced – in modern medical terms, homeostasis is achieved. At this point, you have optimum core health and the immune system is recharged, forming a shield against infections.
Continued use of Triplex will provide the basic life nutrients to bring long term good general health, vitality and physical wellbeing, and help prevent the development of chronic age-related problems such as memory loss, arthritis, diabetes, high cholesterol and Parkinson’s through the smooth flow of Qi energy. In the young, it helps to tone the body, energises and promotes radiant health.

Using a formula that has taken 15 years to perfect, whole dried roots are ground and then mixed with other natural ingredients to make the prescription more bio available. The nutrients and phytonutrients in Triplex can be easily absorbed and utilised by body cells. The herbal mix is then made into capsules for easy consumption and convenience.

The importance of kidney health
The heart is often thought of as being literally, the heart of the body system, but in TCM, the kidney is the most important. Primordial life, or the essence of life, is stored in the kidneys. The kidney is the main governing organ and drives Qi energy to the other organs. The kidney regulates not only kidney functions, but controls the heart and spleen, as well as lungs. When the kidney starts to fail, the liver and other organ systems get impaired and a host of problems arises.
TCM sees the progression of kidney failure as leading to hypertension, diabetes, cholesterol and other chronic problems, a view that seems to run counter to the modern medicine premise that kidney failure is a result of hypertension and/or diabetes. The latest findings that the kidney is instrumental in “instructing” the body to produce blood as well as regulate blood pressure lend credence to the TCM observation however. So science is only just now catching up with TCM? In essence, kidney is the life, the primordial organ in the body.
Kidney health is thus of paramount importance and Triplex is formulated to target kidney health especially.
With a strong kidney, Qi can be channeled to the liver, spleen, heart and lungs to ensure vital health. These organs, however, are generally associated with a big list of chronic health issues like diabetes, cholesterol, hypertension, asthma, fatty liver, and gangrene, etc. Impaired liver in turn is associated with a host of chronic problems like arthritis, jaundice, obesity, fatigue and impaired immune system, which then allows pathogens to enter the body and make it sick.
In TCM, prevention is considered better than a cure; as such, a strong organ system held in balance to keep sickness at bay is the ultimate goal.

‘Solitary Yang does not permit life; solitary Yin does not permit growth.’
As one ages, the body slows down, becoming sluggish. Metabolism and Qi flow are reduced, leading to coldness and dampness in the body, bringing aches, pain and blockages, and weight gain. The slow, purposeful movements of body and limbs, in qigong or taichi exercises, can restore the flow of Qi and harmonise the Yin-Yang energies to promote the proper functioning of body organs once again. However, these martial art forms take years to master, and is often difficult to reach a therapeutic level that can bring radiant health. Taking Triplex promotes Qi flow to allow the body cells to be constantly renewed – it’s the lazy man’s secret weapon to jumpstart healing Qi energies; a fast-track to the Meridian highway.

Qi and the Adult Stem Cell Theory
Curiously, a parallel has emerged between modern stem cell science and ancient science of Qi and TCM.
Stem cells are cells with the unique ability to replicate itself and become the specialised cells of various tissues – it can be any type of cell the body instructs it to be. Most other cells are specialised and can do just one thing.
Our body produces Adult Stem Cell (ASC), according to stem cell scientist Dr Christian Drapeau and author of The Stem Cell Theory of Renewal, and these cells are released into the blood stream – contrary to prior scientific thinking that the bone marrow only produces red blood cells.
These ASC go to every part of the body, and where there is damage or injury, morphed into the respective cells and function as new. For example, if our liver cells get damaged, ASC will be produced in the bone marrow and migrate to the liver where it multiplies and become new liver cells to help in the repair process. We now know this is the natural process of tissue renewal taking place in the body every day, from the day we were born.
Stem cells are moored in the bone marrow and needs to detach themselves before they can migrate to where they are needed.
As we age, this ability to break free tapers off and as a result, older persons have less free circulating ASC and the body reserves them for critical areas only. Hence, stem cells will not be sent to the hair, a non-critical organ. Hence our hair is the first to turn white and drop off. So too the skin, which starts to show signs of ageing or develop other problems.
A healthy body produces a lot of Qi energy for chemical processes such as breaking of stem cell moorings. Triplex supplies nutrients to nourish organs which in turn energise Qi.
ASC and Qi – two separate, but parallel, worlds. ASC is doing pretty much the same job as Qi in the body: both migrate to problematic sites to repair and heal the area of sickness.
Just as Dr Drapeau has realised, that ASC were the very foundation of the body’s natural healing system, TCM practitioners have been using Qi as the body’s natural healing system for thousands of years before, manipulating Qi around the meridian pathways to “unblock” stuck Qi that is causing sickness.
The scientists and TCM exponents do not use the same language of expression, but we can see that what they are saying is essentially the same: The body has an ability to heal itself. And therefore we just need to support and allow this self healing to treat the patient.
Said Dr Drapeau: “The moment I realised the role of stem cells in the body, it brings an entirely new approach to the whole concept of health. Instead of trying to take things that will eliminate the bacteria, the disease, I essentially do things that will support the natural renewal, healing system of the body … I simply prevent the problems, and support the ability of the body to rebuild itself.”
Isn’t disease prevention a very big part of TCM?
We can say that in stem cell research, TCM has been brought up to speed with current day scientific thinking on health and disease management. It’s where science meets TCM and they both agree.

Documented evidence
Our experience over the years shows that Triplex taken diligently can help alleviate most ailments. A healing crisis may occur initially but once the body is cleansed of toxins with Triplex, health takes over.
Severe cases of gangrene where the patients’ legs and other appendages were supposed to be amputated saw a dramatic turnaround with Triplex. With chronic problems that have no known antidote, improvement was seen.
The dramatic improvements we had witnessed – and continue to witness – validate the fact that we have truly managed to come up with a simple, over-the-counter supplement that can make a big and sustained change in community health, fulfilling our mission of “making herbs simple” for all.

Observable effects include
1. Increase in energy and alertness levels.
2. Increase in Yang energy, felt as a warming sensation and revitalization.
3. Improved circulation.
4. A feeling of general well being due to the smooth flow of Qi and balancing of Yin and Yang elements
5. Improved efficacy of whatever medication one is taking.
6. Improved bowel movements.

Dosage
We believe that small, sustained doses of Triplex will better improve the functions of the 12 organs rather than large doses. This will also preempt any healing crisis (or Herxheimer reaction) that may prove too severe for some people. (A healing crisis occurs when the repaired body works to get rid of toxins as now it has the ability to do so when organs are healthy. Symptoms range from mild diarrhea, fever, headache, itch, to joint and muscle pain, body aches, general malaise, sleepiness and etc.) This principle of small, sustained doses also allows Triplex to be safely taken by anyone, allowing it to be purchased over the counter without a prescription. One tablet a day is the typical dosage, but if it proves too strong, you can slow down the reaction by taking it on alternate days, or amp it up to two tablets a day for boosted action. In herbal therapy, our advice is to take a mindful approach and listen to what your body is telling you to do. And bear in mind that herbal medicines heal the body gradually and one shouldn’t expect overnight results. Disclamier.

Herbalist Asia offers Full Guarantee for all products. We are confident that you will be satisfied with our products when mindfully applied for their intended usage bearing in mind that herbal therapy is a more gentle and gradual treatment that may require time as specified in the product information. However, if you are dissatisfied with any of our products for whatever reason, you may return it by emailing info@herbalistasia.com. We will be happy to replace it or give you a refund. Terms and conditions apply.

For some, a healing crisis – or Herxheimer Reaction – may occur as the body heals itself. This often happens when one seeks holistic healing. In contrast, in the use of modern medicine, the symptoms of pain are often suppressed by the presence of painkillers.

The healing crisis manifests as symptoms of getting worse instead of better. So you start to think that holistic healing is not working. Many give up trying to get well the natural way when faced with a healing crisis. That’s when we need to remember that in holistic healing, it may get worse before it can get better.

Why is this happening

As the body starts to heal, the bacteria that are making you sick start to die off, releasing endotoxins into the blood and tissue faster than the body can deal with. This cascade of toxins provokes an inflammatory response. This is not cause for alarm as it is normal for the body to generate an immune response when challenged. Those with effective detoxification and elimination systems may not experience any significant changes. It is important to understand that the aggravation is due to immune system response and not a progression of the disease.

To heal the body, a medicine needs to do two things: kill bacteria and viruses, and remove toxins from the body. A healing crisis occurs when one or more of the following takes place as a result of holistic intervention:

THE KNOWN SYMPTOMS INCLUDE (NOT EXHAUSTIVE)